MG has followed up on its strong start in Europe with sales tripling in 2021. Despite the challenges posed by the ongoing shortage of computer chips and the impact of the Covid-19 pandemic, MG Motor Europe sold 21,946 vehicles in mainland Europe, compared to 7,200 units in 2020.

When MG Motor Europe started its operations in October 2019 with the ambition to make electric mobility accessible for European motorists, the brand immediately made an indelible impression. In the Netherlands – apart from the UK, Ireland and Malta the first country in continental Europe where MG set foot – 2,000 vehicles were registered in the first two months already. In Norway, where sales started in early 2020, the MG ZS EV quickly rose to the top 10 best-selling cars overall. This also happened in Denmark a few months later.

After Iceland, Belgium, Luxembourg, Austria and France joined the list of sales countries in 2020, MG started its operations in Germany, Spain, Italy, Portugal and Sweden in 2021. MG Motor Europe now operates in sixteen European countries. Within just eighteen months, twelve national sales organizations have been set up and no fewer than 400 sales and service locations have been opened, underlining the growth and ambition of the renewed iconic car brand.

The brand’s success is due to the fact that MG presents itself as the smart choice in terms of price, equipment and technology, without compromising on quality and safety. The MG ZS EV – the first model with which MG Motor Europe entered the European market in 2019 – was the first 100% electric SUV that is truly affordable to the general public, while meeting all the needs of European motorists. In addition, it was the first-ever electric SUV in the B-segment to receive a five-star Euro NCAP safety rating.

It’s not without reason the MG ZS EV already pleased more than 15,000 customers in its first full year of sales. Thanks to its characteristics and unique proposition, it was also named ‘Car of the Year’ in Sweden (overall including ICE’s) and ‘Family Car of the Year’ in Belgium.

The MG ZS EV as the most successful model to date is followed by the MG EHS Plug-in Hybrid, which has been on sale since the beginning of 2021 and is particularly popular in Spain, Italy and Denmark. The MG Marvel R Electric, the third model in the range and MG’s flagship launched in October 2021, received critical acclaim and started sales exceptionally well. In a short time, the entire European stock was already sold out. Due to the continuing shortage of computer chips, the enthusiasm for the Marvel R Electric is not fully reflected in the 2021 sales figures yet. Given the order intake and waiting list, the Marvel R Electric will continue its upward trend in 2022.

Another highlight in 2021 was the market launch of the thoroughly renewed MG ZS EV with a refreshed design, more range, improved performance, shorter charging times and advanced connectivity. The next highlight awaits in March. Then MG will introduce the new MG5 Electric: the world’s first all-electric station wagon.

Matt Lei, CEO of MG Motor Europe, is delighted with the 2021 sales results: “MG is doing very well in Europe. In addition to tripling our sales in mainland Europe, the number of MG Brand Stores has also grown from 150 to 400 in the past year. MG is more visible and our brand awareness continues to increase. Since we have been active in Europe, we have shown to be of proven value. But our ambitions obviously go further. In 2022, we expect to triple our sales again. We will introduce new electric models and will have a stronger presence in Europe.” 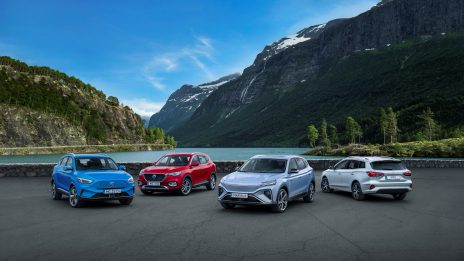 The Drive EVolution – MG4 Electric celebrates its European launch with prices starting from € 28,990*

Agile, dynamic, fresh – the exceptional design of the MG4 Electric in detail